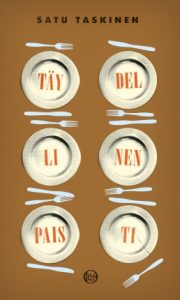 „In recent years the Finnish novel has been refreshed by central European tones (–). Among these reforming powers is Satu Taskinen, whose first novel, Täydellinen paisti (‚The Perfect Roast‘, 2011), won the Helsingin Sanomat prize for a debut work.

The novel, set over a day and describing a Viennese family’s All Saints‘ Day lunch and, in particular, its demanding preparations, aroused admiration, but also wonderment at its slow, thoughtful monologue, in which absurdist humour and irony mixed with a melancholy atmosphere.

Satu Taskinen, who studied philosophy and German philology at Helsinki University, has lived and worked in Vienna for a long time. Her second novel Katedraali (‚The Cathedral‘), is also a one-day novel describing a Viennese family.

Taskinen (born 1970) examines the world of the European middle class: how to live in a world that is growing increasingly unequal without becoming anxious and without a sense of guilt; where do the limits of personal responsibility lie? The author’s style and the works‘ intense world have been compared to Thomas Bernhard, Elfriede Jelinek or W.G. Sebald; Finnish critics have also placed a positive emphasis on the moral philosophical approach of the novels, which is felt to be un-Finnish. (–).“
MERVI KANTOKORPI, BOOKSFROMFINLAND.FI