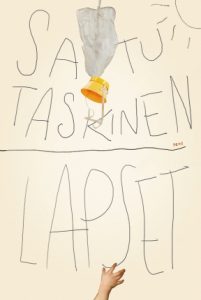 The course of the day should be clear. After work, Navid leaves the classroom, buys a gift and a card for his grandchild, and makes his way to the birthday party. But Navid isn’t feeling very well at all for some reason. He’s troubled by the absence of his wife Sara, and his thoughts keep going around in ever bigger circles. The world around him is really the one that’s spinning: Europe is shaking in its foundations, and inequality is growing everywhere. Amidst these changes, and with the megalomania of a preacher, Navid is trying to move things in the right direction and find the best possible way to save what people can save together. / HELSINKI LITERARY AGENCY

“The absence of paragraphs forces the reader to concentrate on the inner rhythm of the sentences and to sense the pauses and variations in speed by listening to the breathing. Thanks to Taskinen’s use of words and the musicality of her language, the text forces a close read- ing that gives rise to a feeling of intimate presence. It has the authentic beauty of direct speech. […] In Children a miracle happens: the voice of one person becomes that of everyman. Speech ows over the boundaries of personality, identity, social status and historical circumstance. Taskinen has not merely written a novel; she has written a touching expression of humanity which demonstrates that good art should also have pathos.”
TOMMI MELENDER, PARNASSO LITERARY MAGAZINE

„Taskinen makes observations that often are so sharp that they hurt. (–) Satu Taskinen is with this book, if not before, risen pretty high up on the ranking list of Finnish fiction.“
HARRI NORDELL, HELSINGIN SANOMAT NEWSPAPER