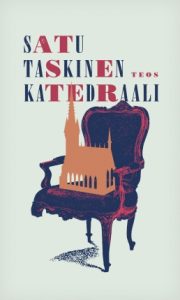 „The narrator of Katedraali is a lonely woman in her forties who is not quite all right; Tea’s internal disorganisation is also visible on the outside. She is clearly a compulsive hoarder, at least in the eyes of her family and her neighbours.

It is the day of the funeral of Tea’s younger sister: Kerstin has died at the age of only 37 after a long genetic illness. For years, Tea has been living in near isolation in her apartment among things and rubbish. Death has drawn the family together. Anxious, at her older sister Bea’s house, Tea gathers the guests‘ serving plates into too-tall piles, the same as the yogurt-pot pyramids she makes at home.

The novel is an excellently told monologue which wanders from global catastrophe to intra-family trauma. How did the daughter of a bourgeois Viennese family, a doctor’s wife and the mother of a clever young man become a builder of yogurt-pot towers? As you might guess: there is no one reason for the depression of the human mind. Her childhood home and her mother’s loveless distance gradually emerge as the foundation for Tea’s powerlessness. The family’s attempts to make themselves look balanced to the outside world have resulted in Tea taking refuge in conserving solidity. She has become a chatelaine who has abandoned herself. ‚The best we can do is stay to one side, save and sort.‘ Tea’s marriage has broken up and she retreated to her solitude. (–) The novel’s questions are big ones: what to do, how to live a good life (–).“
MERVI KANTOKORPI, BOOKSFROMFINLAND.FI

Extracts from the novel Katedraali by Hildi Hawkings